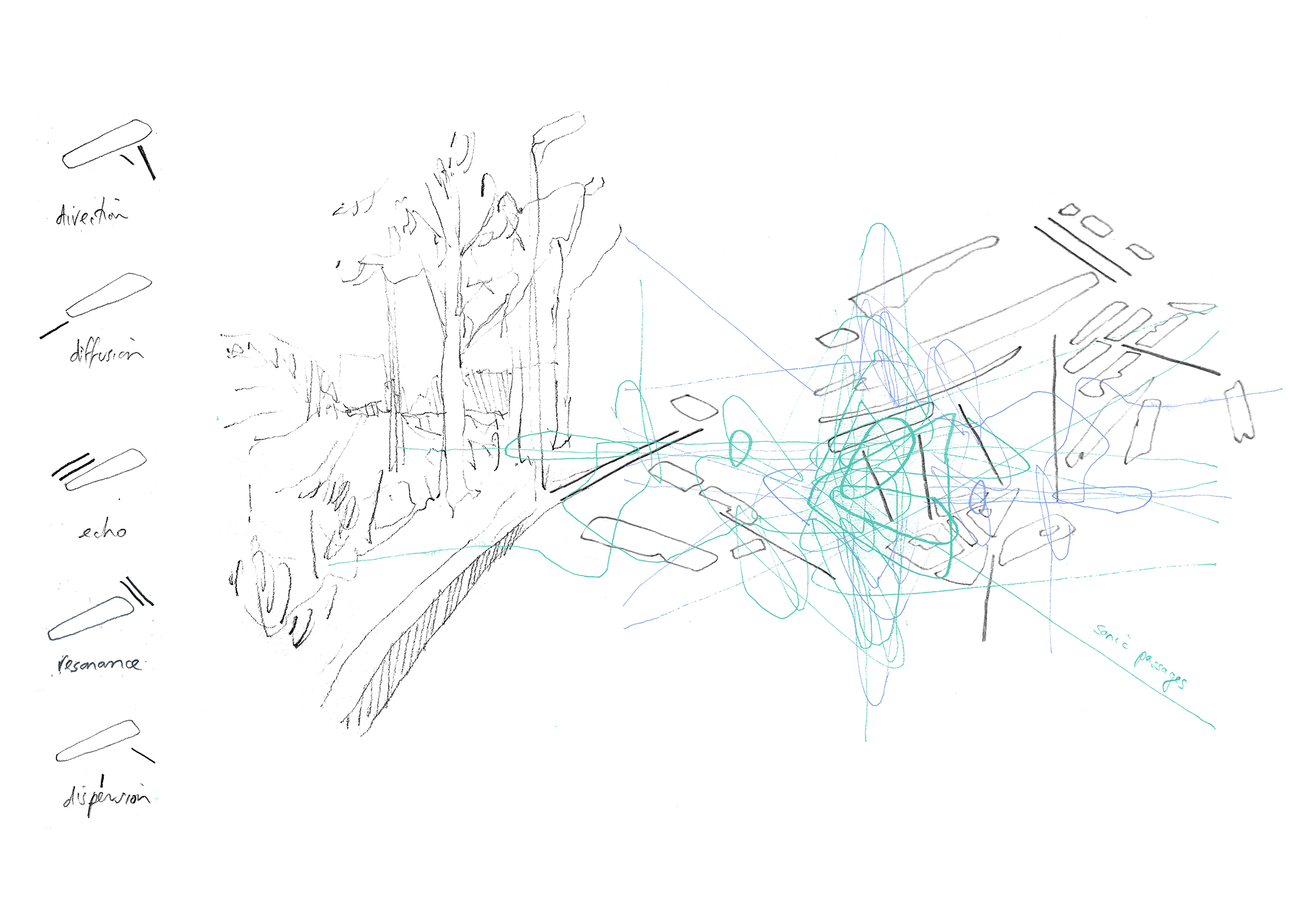 Drawing from our contributions to the ‘Scoring: Paris’ workshop in response to the site of Chapelle Charbon, our notation provides a reflective window into which past sounds, current spaces, and future scenarios of urban sonic landscapes can be considered. As Cornelius Cardew suggested, ‘notation and composition determine each other’ and our proposal provides a method to record existing urban sound environments and propose new ones, a live continuum that resonates over time. Human and natural activity can be traced through their produced soundscapes that can be further transformed to inspire forms of adaptable urban design.

Our notation illustrates sonic passages by forming an interplay between existing and imaginary soundscapes. Sonic passages act as means to reconsider the past and the current, and to build future spatial, material, temporal and social relationships in an urban area or a site. Using sensing systems attached to real time sound processing devices, sonic passages reflect urban environment parameters through sound. Existing sound sources are reprocessed according to movement, air quality and noise levels in several locations to enable states of direction (sound directed further from the original site to nest in a new area), diffusion (sound brought at the edge of the site’s borders to communicate it’s inner state), echo (sound exchange between sites), resonance (sound taking over a site) and dispersion (forming a distributed soundscape). The different modes provide ground for new social and spatial relationships.

Sonic passages operate beyond the discontinuity of physical barriers by allowing an exchange of activity inside, outside and around sites. Our work suggests new ways for listening to spaces, moving through spaces and imagining their future potential. These principles are not limited to this site but represent a method to consider a new approach to sonic urbanism.

Dr. Eleni-Ira Panourgia is a sound artist, sculptor, and researcher whose work focuses on the intersections of visual arts, sound and performance in relation to materials, technologies and social processes; she is a member of LISAA Research Lab, the Centre for Creative-Relational Inquiry, RAFT Research Group, Onassis Scholars’ Association, the Chamber of Fine Arts of Greece and Greek Sculptors’ Association.

Dr. David Buck is a landscape architect and educator whose work draws conceptually and directly from music, focusing on integrating theoretical and speculative approaches to landscape representation, and is the author of A Musicology for Landscape (Routledge, 2017).