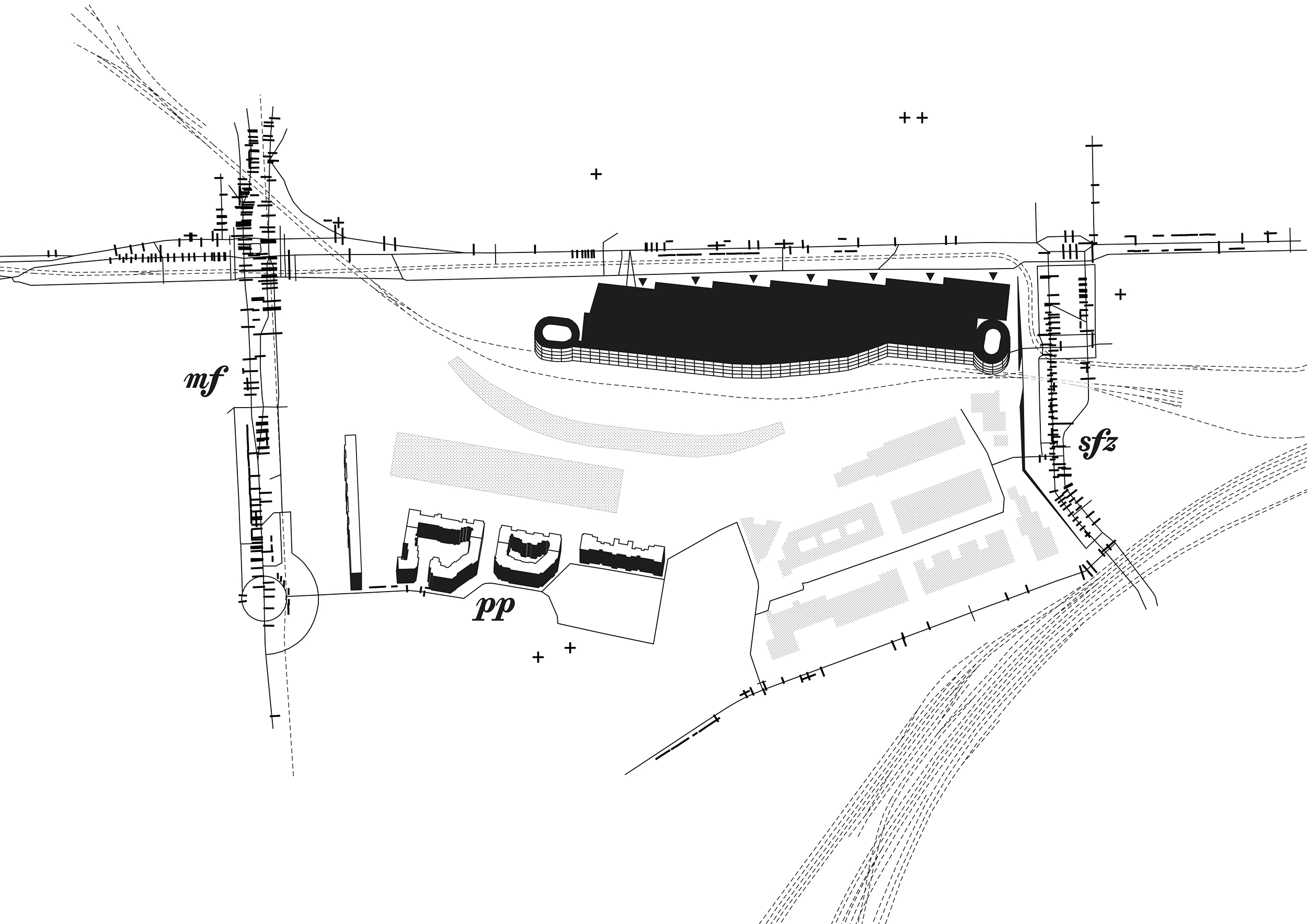 This notation is an experiment to score a ‘terrain vague’; a term coined by Ignasi de Solà-Morales to describe the formal absence in cities, namely abandoned and unproductive pieces of land with often undefined limits. Traditionally, vacant land parcels are represented in cadastral plans as geometric shapes with solid outlines to demarcate their closed boundaries and solid black or transparent infills to indicate their non-active function. In contrast, this notation, inspired by Richard Sennett’s essay on ‘Five Open Forms’ and the 1980 symphonic poem of Luciano Ori ‘The Shocked City’, seeks to challenge this non-open form and propose new ways to document territories. Through the use of visual, urban, geographical and musical symbols, the score maps the disused site of Chapelle Charbon within its surrounding context in the northern part of Paris. The site used to function as a railway depot run by SNCF and is now largely inaccessible to the public.

Instead of drawing a line that demarcates the site’s boundaries, this georeferenced notation captures the entire ‘terrain vague’ all-at-once by highlighting its various open elements in and around it, including its borders while ‘inhabiting’ the porous space in-between them. The score annotates the passing cars at the streets around: the elevated highway in the East, which becomes a linear yet liminal space that connects the banlieues to the city centre (sforzando); the main street in the West with its continuous and vivid sound sustained by the traffic (mezzo forte, tenuto, tr.) composing the symphony or cacophony of urban life locally; and the massive and iconic concrete structure of the depot inside the site which acts as a visual and architectural signifier in the neighbourhood (spiccato, staccato, pomposo). Other forms include the high-rise buildings in the South, especially the housing complex (3 blocks) which denote a more inaudible and private vertical border (pp).

What is most interesting is that this notational method allows for all the multiple elements of the space to frame it without enclosing or sealing it; at the same time the georeferencing process allows for assigning real-world coordinates to each element of the score so that it is played in real-time with the city itself. The actual space of the site is then captured by the synchronous and sequential description of these individual elements by means of their configuration and association with each other in space. It lies there as a space of rest and reflection in silence—a pause before acquiring its very own architectural notation.

Dr. Fani Kostourou is an architect and urban analyst, currently working as an associate at Theatrum Mundi leading on research, design, and creative development.